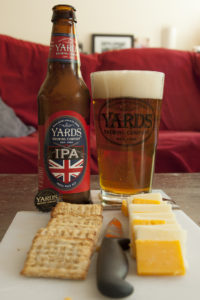 Yards is one of those breweries that, as unfair as it is, I generally avoid. I don’t know many people that are big fans, so I’ve been skeptical. Even after reviewing their Saison (which I did enjoy), I was still hesitant to try the rest of the line.

That all changed this week when Ron Johnson, the Yards New Jersey Sales Rep, was co-hosting a craft beer tasting at my favorite place to buy the goods. They were sampling out four different brews (including Saison) that I had not tasted, but was more than willing to try. I enjoyed all four that I tried, especially “Brawler” and their India Pale Ale.

So, I grabbed a six of the IPA and brought it home with me. And I got a pretty cool pint glass to pour them into, too!

?Anyway, here’s what the fine folks over at Yards have to say about their India Pale Ale: “IPAs were originally brewed to survive the epic sea voyages from England to India. Ours is no different. Hailing from a perfect marriage of sweetness and bitterness and loaded through and through with citrusy and piney hops, this beer will surely survive the journey from your fridge to your couch.”

First of all, this is a beautiful pour. Clean, clear golden color with copper lowlights. Seriously, when I think of beer, this is what I see in my mind’s eye. A typical pour yields a thick, foamy off-white head that holds up very well and leaves a nice amount of lacing behind. The aroma is light – some hops, some citrus, definitely some malts and some other fruitiness as well.

Obviously, the taste is what made me bring it home after sampling it. Not your usual IPA by any means and not really one for the hop cravers, but it is still a nice ?offering. There is a strong malt presence that overrides the hops from start to finish. Of course, if you aren’t a fan of the hops, then this might be the perfect IPA for ?you. And while this isn’t at all what I usually expect out of an IPA, I’ve still enjoyed every sip. You get a bit of the citrus up front along with a hint of hops, but like I ?said, the malts create the most present flavor, which really smooths things out. Very little carbonation allows you to really enjoy the flavors that are present, ?allowing the beer to sit on your tongue a bit longer. And since this India Pale Ale has such a nice aftertaste (similar to the first sip), that’s really not a bad thing.

?I’ve been drinking this one with some pretty strongly-flavored meals. Mexican burgers (smothered in salsa and cheddar), Apricot-glazed chicken, extra sharp ?cheddar cheese on crackers (see picture), things like that. And it’s really been a good match for those types of flavors.?

?It comes in at 7%, which is not bad for a midday pint, or hanging out at the grill. You aren’t going to hurt yourself if you have a couple. The price is pretty good too, at ?$8.99 for the six.

?Congratulations to the crew at Yards. They’ve won me over by going two for two (Well, really four for four, since I enjoyed everything at the tasting, too). I’m looking ?forward to grabbing Brawler, too!