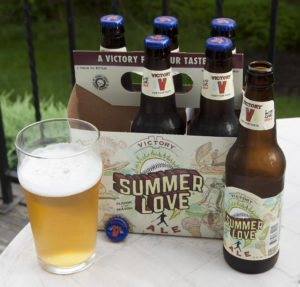 Ahhhh…one of my favorite summer beers. Victory Summer Love, I missed thee. There are few things more refreshing in the summer than a high quality American Blonde Ale. And Summer Love is just that.

From the Victory site: “With the sublime, earthy familiarity of noble, American and German hops backed up by fresh and clean German malts, Summer Love Ale??ends with a surprising burst of lemony refreshment from fistfuls of American whole flower hops. Love Summer, now.”

Summer Love pours with a nice, clean golden color under a foamy white head that hangs for a bit before fading. Leaves behind a decent amount of lacing, too.?

It has a very hoppy, crisp scent. The smell alone actually reminds you of summer with citrus and grass on the nose. Really, really pleasing.

The taste doesn’t really match the smell, but that’s not necessarily a bad thing. Instead of a strong hop taste, you get wonderful malts, an almost bread-like taste, but it plays very well with a nice level of citrus and hops. Very different, indeed. I’m usually not big on a malty brew in the summer months, but this one just works. You expect the beer to get heavy, but it never happens. The flavors stay light, as does the feel and before you know it, you’ve finished a pint and are asking for another.

No strange aftertaste or lingering flavors to take this one down, either. Like I said, this is one of my favorite summer brews!? 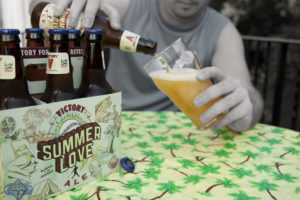