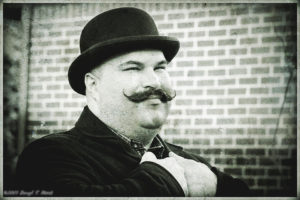 Unique portraits that are vintage in nature are a passion of mine. Many of my personal projects involve old cars and models that are decked out in a pin-up style. It’s not unusual for me to seek out vintage/classic/retro toys and apparel at consignment sales. One prop can inspire an entire day of shooting. Such was the case when I worked with Archer – I found the Radio Flyer Retro Rocket at a sale and immediately a vision came to mind.? 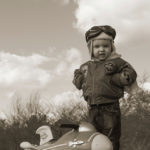 The same thing happens often when I see Nick. He’s my neighbor and we have a lot in common, which surprised me quite a bit. You see, like many people, I had a preconceived?(and way off base) notion of what it means to be a Jehova’s Witness. I really didn’t believe that they could enjoy certain things. Things like popular music, or alcohol. So I’m sure you can imagine my confusion the first time I saw Nick wearing a Beatles shirt. Or when later, I found out he’s a craft beer fan, like me. These two things prompted me to start asking Nick questions about his faith. It was a pleasant conversation and one that I’m glad we had. I learned quite a bit that day and am better for it.

I also discovered that much like me, Nick has a vintage style and is a fan of Steampunk. And ever since, I’ve been wanting to get Nick in front of the lens. I didn’t really pursue it too much, but when I started seeing photos of Nick wearing a derby and sporting a mustachio, I knew I had to make it happen. I had an end result in mind, so it was just a matter of getting the shot.

Unique Portraits – Getting the shot

Like I said, I’m all about the unique portraits. When Nick and I were chatting the other day, I decided it would be a good time to take a few minutes to get the shot. Not only did Nick oblige, but he went inside to grab his derby and wax up the mustache. See, Nick’s an amateur photographer. He gets what it means to have a shot in mind. It’s always fun to work with someone who “gets it” because they don’t usually mind taking that extra step or two, to help bring a vision to life.

I tried a couple of different spots in the area, finally deciding on a brick wall backdrop with even shade. The light reflecting off the wall gave me the bounce I wanted to highlight the derby, without washing out Nick’s features. The setting sun was dropping below the buildings behind me, creating a shadow across the lower quarter of the shot, about even with Nick’s collar. It was ideal for creating separation between his face and jacket, drawing your eyes up, to the important elements of the image.

I opted against using any kind of fill light or reflectors, because I wanted some shadows to add depth to the photo and lend to the vintage end result I was after.

That’s right – even when you’re using natural light, a lot of thought goes into the setting and how the light highlights the subject. It isn’t just finding a sunny or shady spot – it’s about finding the lighting that falls where you want it to, to create a final product that matches the look you want. 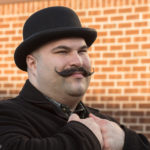 To see some of Nick’s work,
check him out on Tumblr!

Processing:
Photoshop CS6, Hue/Saturation layer to create tintype coloring, multiple texture layers to add antiqued appearance. Motion and surface blur added to mimic long-exposure times which were necessary in the early days of photography. Levels adjusted to blow out the highlights a little more and darken portions of the portrait. Vignetting and border layers added.