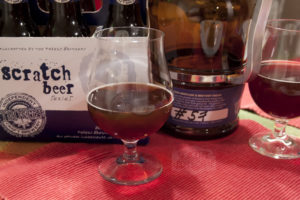 I’d like to preface this by letting you know that I’ll be doing a special write-up about my visit to the Tr?egs Brewery very soon!

Since my regular blog day fell on leap day this week, I decided that I would stick to my routine, but do something special. Usually I stick to beers that are readily available to the average craft beer drinker in my neck of the woods, but this time I am going to review a brewery-available-only (I think!) scratch brew that I had the pleasure of drinking at the Tr?egs Brewery on Tuesday. It was so good that I brought home a growler and an additional 6-pack of it.

I’m not sure if it’s available outside of the brewery, but even if it is I highly recommend the trip for any beer fan. Not only can you tour the brewery itself and see the process, but you can visit The Tasting Room and sample the numerous brews on tap. And believe you me, there is nothing quite like sipping one of these beers while you’re looking at the process that created it.

And now I have the pleasure of having tasted it three different ways: On tap at the brewery, poured from the 2L growler and poured from a 12oz. from the six pack. It is best by far from the tap at the brewery, but I have no complaints about it from the growler or bottle, either. If you have stored it in the fridge, pour it in a tulip glass and keep it in your hands for a bit. Let this one warm up just a little – you won’t regret it!

Scratch #57 is a?Weizenbock that is brewed with two kinds of cocoa powder and two kinds of berries. It’s one of the most complex beers I’ve had the pleasure of drinking and it seems to taste different at the bottom of the glass than it does at the top.

The color is a dark reddish brown with a nice, creamy colored head on top that holds up well. The aroma is heavenly – like berries in vanilla cream and a little banana thrown in for good measure. I mean seriously, Yankee Candle could put this in a jar and it would sell like hotcakes.

At the start, the cocoa is evident, ?then it gives way to a fruity taste. It is incredibly smooth and if you aren’t careful, you’ll find yourself borderline gulping this one down, because it’s so easy to drink. That can be dangerous, as this one is comes in at 7.9% ABV. About halfway through the glass, the cocoa seems to start fading and a vanilla starts to kick in. The last few sips, the berries take over and the vanilla takes a backseat. This isn’t a beer…it’s an experience.