You are here: Home / 52 Portraits / The Portrait – Danielle

Every once in a while, I get an idea in my head that I absolutely MUST put together and shoot. In this case, the portrait was an idea I had for another session that was cancelled and it’s been on my mind ever since.

After creating my faux ICE light, I’ve been looking for more opportunities to use it. So when Danielle and I finally found a time in common to shoot the portrait, I knew right away what I would do. I wanted to play with mixed lighting, in an environment that was not within my control. I wanted to utilize existing light, but accent it with my own. In this case, I used a very white light to separate Danielle from the background, which was bathed in yellow by one street light and a greenish tone by another. 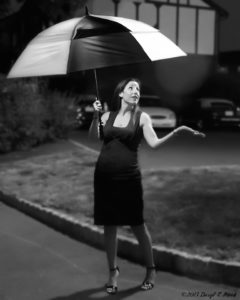 Danielle has a very busy work schedule…and when she’s not working, she’s spending time with her son. So we didn’t have much time to get the shot – I was allowing for about 15 minutes.

I had the location, I had the lighting setup, it was just a matter of getting the two to work together. This shot was one of the last I took.

With the light mounted inside the umbrella, pointing down at Danielle, I had her move from one street light to another for additional lighting and a change in hue. There was also the issue of how to pose – the weight of the light made the umbrella a little harder to hold in the right position. The experience has me thinking that I’ll be doing a similar shot in the future, but switching out for a more compact video light, like this one.

Danielle was a real sport – I mean, how many people are willing to stand outside, under an umbrella with a light in it, under clear skies, in their own neighborhood? She was willing to pose like this for the portrait, even though we had to deal with a nosy neighbor or two and it wasn’t raining. I can’t thank her enough for that!

There was also another thing that came into play. Like so many people who have been in front of my lens, Danielle isn’t a fan of having her picture taken. I promised her she’d love the portrait though and that she’d have fun while we got it. I also had to promise that if she didn’t like the location, we’d move – and to her credit, she stuck it out!

In the end, like so many others, Danielle admitted she did have fun and that she loves the photo. To me, those two things are every bit as important as getting the photo itself. Having your picture taken shouldn’t be a chore…it shouldn’t be difficult. It should be fun and you should enjoy the process. If you aren’t, something is wrong!

Anyway, a great big thanks goes out to Danielle for carving out a piece of a really busy schedule to help out with the 52 Portraits project. This shot has been in my head for a while now and it was good to finally shoot it. And now that I have, I see a few things I’d like to tweak and change…so don’t be surprised to see another ?umbrella shot on the blog, soon!