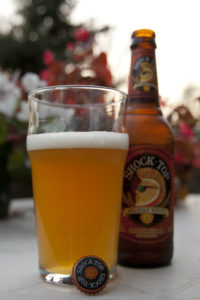 Recently, I’ve had a number of people asking me why I don’t blog about any of the beers from the big breweries. Simple: Those are not craft beers.

Beers like that are the reason I didn’t drink beer for so many years. It’s not that I think the big breweries are terrible. Generally they aren’t a good match for my taste though. There are a few exceptions, but they are far between.

But since I was asked, I decided I’d give something a shot from Anheuser-Busch. I looked at it as kind of a gateway beer for people that are used to the Budweisers and Millers of the world. Sooo…

?Shock Top Belgian White. What can I say about it? I thought that the citrus-peel brewing hook would make it just different enough for the Coors Light crowd to feel like they were dipping a toe into the craft beer pool.

After tasting it, I’d advise them to just do a cannonball right in. Shock Top isn’t worth the stop.

When you pour it, it looks promising. Burnt orange color, hazy like you expect a wheat bear to be, about a finger and a half head. You even get light lacing on the glass. But as soon as you lift it, you know it’s not what you hoped for. You can smell it – you hope to catch the citrus and you do. But it smells like an old orange that’s two weeks past it’s prime. It isn’t awful, but it isn’t pleasant, either. And it’s not the aroma you want in ?your nose when you’re about to take that first sip.

But you sip it anyway, because it’s beer and it’s there and you already opened it or poured it, so…you drink.

It is not the worst beer I’ve ever had. Not by a long shot. But it doesn’t hold a candle to the average craft beer. The 6-pack has been in the fridge since Friday. I gave two away and there’s one left. The first one I drank on Friday and I didn’t like it. The second one I drank on Sunday, while grilling and it was passable as a warm-weather, drink-it-while-cooking-with-fire kind of beer. Tonight, ?I wasn’t disgusted by it.

There is no complexity to this beer AT ALL. So I can’t tell you about layers, or flavors because honestly, nothing jumped out at me. It’s kind of bitter with a wheat aftertaste, I guess. The one thing I’ll give them is the way it feels in the mouth. It’s a medium body brew with quite a bit of carbonation. As a result, it does feel good on the tongue.?

So at least I’m not saying to pour it down the drain. It’s not a great beer, but it isn’t swill, either.

For someone that enjoys Budweiser, Coors, Miller, beers like that, Shock Top is right up their alley.

For the typical craft beer fan, well…they’re probably cursing me right now for even buying it.

I’d give Shock Top a 3 out of 10. If I see it in a cooler, surrounded by Miller Light or Bud Platinum, I’ll grab the Shock Top every time.

But I’ll never spend my money on it again!?