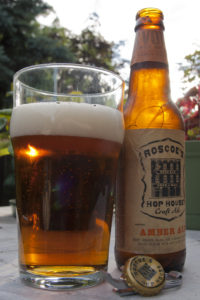 The other night, a neighbor asked if I wanted to swing by for a beer and cigar night. I’m always willing, but don’t know anything about cigars. So I offered to bring over a selection of beers, if he provided the cigars.

So we enjoyed a few of my favorites, but then he said “Hey! I’ve got a new one for you to try!” then he proceeded to bring out a pair of brews from Roscoe’s Hop House. First was their IPA, the second was the Amber Ale.

The blog is IPA heavy, so I thought I’d grab a sixer of the Amber Ale and review it this week.

?First of all, even though each brew in their line is an award winner of some kind, Roscoe’s isn’t all that easy to come by. Based on the small amount of information offered on their website, it seems to be available in only 17 states and by only one chain of stores in most of those states. I know they are based in Rochester, NY, but have no idea how long they’ve been brewing.

What they say: Nothing. Honestly, their website should really be revamped, sometime last year. I can tell it’s called Amber ale, has won awards and is 5.5%. That’s pretty much it.

My take on it: There’s a reason I went out and bought this Amber Ale after having one.

It pours out with a clear copper color under an off-white head that dissipates rather quickly and leaves light lacing behind on the glass.

As expected, ?the malts come through on this beer really nicely. A definite taste of caramel sweetens it up just right, resulting in a very nice aftertaste with no bitterness at all. It feels slightly more light bodied than I expected, but that makes it all the more drinkable. The label claims there is a hint of hops, but if it’s there, I guess I couldn’t take the hint. ?I didn’t catch the faintest bit of hops, though I’m sure they’re there. The flavor is somewhat mild, but still pleasant and smooth.

With the malts and caramel flavor being so present, this isn’t the type of beer I’d seek out on a warm day, even though it is refreshing. But I can see myself getting back to it in the fall, while enjoying their IPA for the summer.

I’ll give this one a 5.5 out of 10. It’s a great beer for what it is, maybe even a standout in the amber ale world. But it is still on the simple side of things.

I was able to pick this one up at an introductory rate of $5.98 at a local liquor store, with the regular price tag reflecting a price of $8.99.