A few weeks ago, my good buddy Lance (check out his blog here: OxenTrot) was in town with his wife, Laura. Lance and Laura are the best friends we’ve ever had and they were here to celebrate the impending arrival of their first child. So while the ladies celebrated with a baby shower, a few of us boys headed out to Hailey’s Harp & Pub, right down the street. ?I wasn’t sure what kind of ? 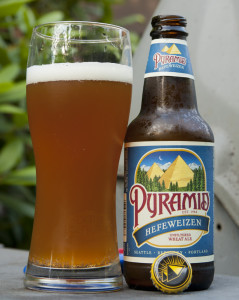 tap list to expect, as Hailey’s appears to be a very typical Irish Pub. I figured I’d see Smithwick’s, Harp and of course, Guinness. And while each of those beers were available, ?I was pleasantly surprised to find not only a ?an excellent craft beer tap list, but also a very friendly and?knowledgeable?bartender. He made some great?recommendations?for each of us and as a result, each of us was introduced to something we hadn’t tried before.

For me, this was my first introduction to anything ?brewed by Pyramid…and after having two Hefeweizens, I was anxious to get my hands on a six pack.

That proved to be more difficult than expected.

After being temporarily shunned by Frank (for purchasing beer at a different liquor store last week), he sent me an e-mail to inform me that after weeks of me hounding him with fair regularity, the Pyramid I had been asking for had finally arrived! Mind you, Frank had been requesting it from the distributor all along, it just took a while to get there.

But I digress…besides, you’re here to read about the beer, right?

Pyramid Hefeweizen. What can I say? I had it, I fell in love with it and I don’t need to search for a new Hefeweizen any time soon.

Yes, it really is that good. And after having it from both the tap and the bottle, I’m still thrilled with it. This is not one of those brews you have from the nozzle, then get it home and are disappointed with how different it is when coming from the bottle.

First of all, here’s what Pyramid has to say: “The standard by which all other wheat beers are judged. Our award-winning American-style Hefeweizen is a unique take on the traditional Bavarian classic. This refreshingly unfiltered wheat ale delivers a distinctively smooth flavor worth savoring with friends.”

Now here’s the disclaimer: Hefeweizens are not for everyone. I mean really, beer styles are so varied that there is something for everyone, but not everything is for everyone. Make sense? Me? I love the style, so I guess you should keep that in mind while I rave about this brew. Your mileage may vary. Truth be told, even an average hefeweizen is likely to get a pretty good review from me!

It pours with about a one finger, short-lived, white head over a cloudy amber colored body and leaves a small amount of lacing behind. And one of my favorite things about a good hefeweizen is the smell. Pyramid doesn’t disappoint in this department, with an aroma that will make you think of breakfast cereal with bananas in it and even a hint of cream and from time to time, a little bit of citrus sneaks in there, too.

Due to what catches you on the nose, you expect this beer to be fruity and while there is a touch of that, it is not overbearing and does not dominate the blend. For me, the first thing I caught was a bite of citrus, that quickly gave way to the grain with light spice. But the aftertaste gets back to that citrus flavor and runs a little to the dry side. Very refreshing, very easy to drink and very hard for me to keep in the fridge!

Even though there is no serious carbonation to lighten up the taste, this is a great beer for a warm day. ?And coming in at 5.2%, you won’t have to worry about spoiling yourself a little bit.