You are here: Home / Blog | The Digital Artscape / Portrait of Snow White

I know, I know. It’s been a while. Too long, really. But like I said last week, I’m back. And I’ll be blogging regularly again!

Back in October, my favorite model and Digital Artscape cover girl contacted me about a shoot. She had picked up a very pretty Halloween costume and wanted?pictures, so it would see more than just one day of use. Of course, I jumped at the chance, because it’s always great working with Amanda.?Even better, I had a perfect location. When she saw it, she agreed and we set the date.

It was great to get out and shoot again. The weather cooperated, the location was awesome and Amanda, as always, looked great.??The castle on the lake was a perfect background for a portrait of Snow White. 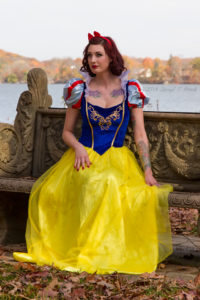 The best part about working with Amanda is that she is very patient and is willing to allow me to try some different things. I had some new toys I wanted to test and some?ideas I wanted to try. She’s an absolute pro and gave me everything I was looking for and then some.

We started in the lakefront park area across from the castle (which is also where we finished, but that comes later). I?used my Yongnuo YN560-II?both on and off the Canon 7D?for fill as needed.

Using the flash, even in the middle of the day, allowed me to create some separation between Amanda and the background. I tend to be a test-as-I-go type of guy, so it took a little time to find the right settings for a few of the shots. Bear in mind, with photos like this, I am after the result I personally want. That is not always what is technically correct. My friend and fellow photographer Scott Wyden wrote a good guest blog at currentphotographer.com titled “Breaking Photography Rules.” Let’s face it – sometimes the best photos you will ever take will be the ones that you aren’t even supposed to capture. Break out. Break the rules. Do it your way.

And watch what happens.

But I digress. Back to?the Portrait of Snow White.

I contacted Pax Amicus Castle Theater in Budd Lake and obtained permission to shoot on the castle grounds. First reason being, the castle is private property.?Though there is a waterfront park there and they don’t require special permission, I wanted to be sure they were OK with us coming there for the shoot. I was glad I?contacted them ahead of time, because they let me know there would be a performance for local school kids and that I should wait until after lunch. The result was having the exterior of the castle all to ourselves. You couldn’t ask for a better setting for Snow White.

All photos shot?at 200 ISO?and ranged from f/3.4 to f/11. Gear list can be found below. Thanks for having a look! I know it’s been a while, but a site update and new blogs will be coming soon!