OK, courtesy of Mother Nature, the second day of my shoot in NY was postponed, so I manage to stay on schedule this week!

I love a good Bock. Even when I wasn’t drinking beer other than the occasional social pint, I still missed being able to have a Shiner Bock, like I did when I visited my folks in Texas. Now, if I see a Bock on the shelf, I’m probably going to try it. I’m all about a ?Belgian style, but I can’t resist a Bock, either. ? 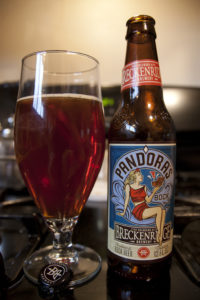 So this week when I noticed Breckenridge Brewing’s Pandora’s Bock on the shelf, I didn’t even hesitate. The packaging is attractive and with a name like Pandora’s Bock, I HAD to have it. It’s been a busy week, so even though I bought the 6-pack on Monday, this was the first chance I had to pour one.?

What they say: “Release the wealth of flavor and complexity unto the world.?Bottom fermented at colder temperatures for a smooth yet assertive character.”
In the bottle, it does not smell like a Bock. I started feeling disappointed, because it smelled like a rich Coors or something. But once you pour it, it has a very pleasing, sweet aroma in the glass. It pours to a clear, deep, brownish-orange with very little head and leaves very nice lacing behind.

The malts will be the first thing you taste, and you’ll notice a fair bit of carbonation right away, too. Without it, this beer would be syrupy, I suspect. The taste finishes out with a mild hoppiness which is nice, but doesn’t really do anything to enhance the overall impression the beer leaves. It’s not a bad beer, but there’s really not much to it. For a Bock, it has too much carbonation. So much in fact, that you almost feel like you aren’t drinking a craft beer. Truth be told, this is what I expected from the Yuengling Bock. In both cases, I have been surprised. But Yuengling surprised me in a good way. The Breckenridge, not so much.

It’s another one that I would grab if I had a choice between it and a Miller offering, but it’s not one that will find it’s way into my fridge again.

On the other hand, if you’re trying to introduce someone that’s used to lighter beers from the ?big breweries, this could be a good gateway. It may not be as good as what your average craft beer drinker holds as a standard, but to a newcomer, it would be a great way to introduce them to the dark side. At 7.5%, it might give them a little buzz – so you’ll get to laugh at the nOOb when it catches them off guard.

There are far better examples of the style out there!?