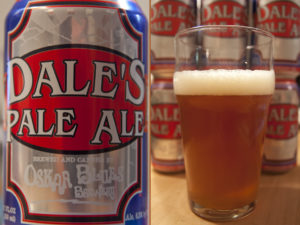 My take on it:
WOOHOO! Good beer CAN come in a can!

My craft beer guru at the local alcohol depot has pointed this can out to me more than once. I was skeptical, to say the least. But the can art had me curious and I knew Frank wouldn’t steer me wrong.

First of all, I was impressed that I got this kind of head from a canned beer. ?It’s been consistently around one inch of foam with a nice off-white color. The beer itself is slightly cloudy and has a nice orange tone. I was stunned when I checked the content and discovered that it weighs in at 6.5%.?

In a can? Seriously?

This is a pretty serious pale ale. They aren’t kidding when they say it’s hoppy, but while it has a strong taste, especially for a pale ale, it IS very well-balanced with the malts. It has that hint of bitterness that I expect in a pale ale, but it goes down smooth with significantly less carbonation than I expect in a canned beer. You’ll notice a bit of a hoppy taste after each sip, but it’s pleasant.?

Dale’s goes down really easy and is a very refreshing brew. It’s so good that I almost blew the photo, because even with the cans set up, I almost took a sip as soon as I finished the pour!?

I’m going to put this one right up there with Winter Warmer and give it a 8 out of 10.