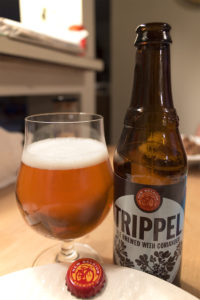 A slight departure from the norm today, as I took a trip to Virginia last week and found what seems to be Craft Beer Heaven at Total Wine in Sterling.

Seriously, their craft beer selection was the best I’ve ever seen. It is no exaggeration for me to state that their craft beer section is larger than some of my local liquor stores. I just wish the RateBeer.com app hadn’t chosen to crash while I was in the store. Oh well, I still got some killer brews!

So why is this a departure from the norm? Because this week I’m reviewing a beer from New Belgium Brewing that isn’t available in NJ (yet).

I’ve had Fat Tire from New Belgium and while I enjoyed it, I didn’t feel it was as good as expected. It could be because I heard so much hype, that I expected to be blown away. Since so many people rave about the brewery though, I figured I’d give the Trippel a shot, since I’m a huge fan of Belgian style ales. But seeing the statement “Brewed with Coriander” on the label had me wary. The price was excellent at $7.99 for the six pack though, so it was totally worth the risk.

As soon as I popped the top, I knew I had chosen wisely. The aroma was wonderful – very warm, a little spice, a little fruit (primarily banana)…just what I was hoping for.

New Belgium describes it: “Our Trippel Belgian Style Ale (pronounced triple) opens with a bold blast of hops that slowly gives way to the fruity esters implied by our Belgian yeast strain. In the Belgian tradition of brewing singles, doubles and triples, Trippel is the strongest with the longest fermentation. Remarkably smooth and complex, our bottle-conditioned Trippel is spiced with a trace of coriander.”?

I’ve been enjoying this beer in a tulip glass, since I don’t have a proper chalice or goblet. It pours with a nice , creamy, white, two finger head over a hazy, golden body and leaves a nice amount of lacing behind.

The taste…the taste is wonderful. I think the highlight for me lies in the carbonation. It’s there, you can see it. But the hops seem to weigh it down, so while it livens up the feel, it doesn’t interfere in the least with the taste. And don’t let the mention of the hops scare you off, either. This beer is so complex, yet so simple and nothing dominates the flavor. Truly a work of art in a bottle. There are hints of banana, hints of spice, hints of sweet breads, hints of clove…but that’s it. Just hints. They are so well blended that they seem mild, but together they create a flavor-filled ale. The coriander that had me somewhat frightened is present, but again, the brew is so well blended that it doesn’t grab you like I thought it might. You do get a good three dimensional taste on the tongue with Trippel – starts out with a mild hoppiness that quickly gives way to that sweet bread flavor and finishes out with a mild?spiciness, that leaves you with a warm feeling. It really makes me think of autumn in the kitchen – pumpkin pie, great spices, a warm oven.

I look forward to more of this coming my way. I’ve already asked my buddy Ox (Of OxenTrot blog fame) to bring me a case when he comes up for a visit in a few weeks.