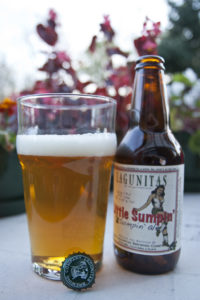 I’m finally getting around to trying something from Lagunitas. I see it often, have heard it’s good stuff, but never picked any up. So when Mr. Beer Guy (Frank) suggested it, I didn’t hesitate.

The Lagunitas is a pretty pour. It’s a picture perfect beer with a hazy, golden body and a creamy one-finger head that holds up very well. Nice lacing left behind.

What they say: “Sneaky Smooth with a Touch of What We Call Wheatly-esque-ish-ness. Crispy Wheat and Pale Malt flavors with a Big Round & Juicy Hop Finish. Everyone Needs A Little Sumpin? Sumpin? Sometimes. You Can Get It All Year Now… in a Six-Pack!”

My take on it: The first thing I’ll say is don’t pair this with fish. I’ve had it with a few meals now and it’s been a nice addition. But NOT with the fish. Oof…I’ll never make that mistake again.

Anyway, it smells every bit like a beer. Not too sweet, not too hoppy, not too malty…it just smells like a beer. As a result, you halfway expect it to have a very typical taste. That lasts until it passes your lips and you immediately want another swig. It’s a very well-balanced beer that runs to the citrusy side and has a slight tingle on the tongue, but still has a somewhat surprising creaminess.

I can’t say a whole lot about this one – I have no bad notes, I can only say this is a good, drinkable beer. It weighs in with an ABV of 7.5%, which also surprised me a little bit, considering the appearance and feel of it.?