On Saturday night, my wife and I had the pleasure of attending the International Great Beer Expo at the Meadowlands Expo Center in Secaucus. There were over 50 brewers there from all over the world.

My first thought was that I wish we’d gone to the afternoon session. I think we would have enjoyed the crowd more. Still, we had a good time and got to sample some great brews that we were not familiar with. While our favorite came from a brewer that was new to me, there were a few surprises in store for me from brewers I’m familiar with. Sadly, not all the surprises were good ones, but I will say that of the 20 different beers I sampled, none were awful.

When we walked in, we went to the shortest line in sight. That turned out to be Ruckus Brewing, where they were pouring Hoptimus Prime (Double IPA, 9%). Based on the name, I had high hopes. ?Good color, nice and clear, and really refreshing. Good beer to start the evening with as we chowed down on $8 cheesesteaks and fries. I enjoyed it enough that I’ve asked my usual packaged goods store to look into stocking it. As we ate, we saw the lines start to subside a little bit, which was the plan. And right after we finished eating, I headed straight for the Weyerbacher table. ?

Now, I would advise all of you to approach a festival or expo such as this one the same way I did: Bring someone with you that you’ll be comfortable sharing a glass with. That way when a brewery has more than one beer on hand, you’ll be able to get a taste of two of them without having to go around again, or make the folks in line angry!

Weyerbacher?had a few varieties with them. I’ve only ever sampled Quad, so I was excited to find out what some of their other beers taste like. I went for Merry Monks‘ ?(Belgian Golden, 9.3%) while my wife opted for Blithering Idiot (Barleywine, 11.1%). Each was a good choice for the drinker. So good in fact that there are a few bottles of Merry Monks’ residing in my fridge and you can expect a full review of it next week. Blithering Idiot isn’t far behind. I just didn’t have anymore room in my fridge! Weyerbacher is now three for three in my book. Merry Monks’ is a wonderful, sweet ale and it remind me quite a bit of?Tr?egs?Mad Elf. As Martha would say, that’s “a very good thing.” Blithering Idiot was also smooth with a very nice start and even better finish.

We criss-crossed the floor, finding breweries I knew I wanted to visit and hitting them when their lines were to the short side. That led us to the Long Trail Brewing table. Having enjoyed Harvest?seasonal in the past, I was hoping to find a year-round that I’d be happy to bring home a sixer of. I felt kind of let down. I knew my wife wasn’t going to like anything Long Trail had to offer, but she was willing to try. She had their Double Bag?(Strong Ale, 7.2%) and I sampled their Traditional IPA (English IPA, 5.9%). Both beers had a heavy taste. For lack of a better term, I would say they were almost earthy. I guess Long Trail overall is an acquired taste.

?Next up was Ithaca Beer Company?where we tried Flower Power?(IPA, 7.5%) and Excelsior THIRTEEN (Wheat Ale, 7.9%). My wife was not a big fan of either. I didn’t disagree. I don’t see myself seeking these out in the future. All in all, Flower Power was a good IPA, but not my kind of beer. It was punchy to me and never really settled in. On the other hand, it was like I had a pint, so I might have to try it again, to give it a fair shake. I felt the same way about Excelsior THIRTEEN. It’s a?stout?and I don’t generally drink stouts. That being said, I know there are people out there that love that taste. Neither brew is bad, just not our style.

So, we headed down the row to Anchor Brewing. ?I really, really wanted to like Anchor’s stuff. Their tap handle was really cool, their graphics are awesome and they seem to be pretty popular. But I

didn’t. I couldn’t like it. I tried?really hard to like it, but I didn’t. I can’t even tell you what I didn’t like. Anchor Steam?(California Common/Steam, 4.9%) was mediocre. It left this weird aftertaste in my mouth that I don’t know how to describe. I hate to say it, but of all the craft beers I’ve had, this one resides at the bottom of my list. ?Sara had Humming Ale (Pale Ale, 5.9%) and I’m not going to even review it. I already feel bad enough about blasting Anchor Steam.?It didn’t help that we couldn’t get a good pour. Four times. More head than anything. FOUR TIMES.

Only Victory was kind of a letdown too. Now don’t get me wrong, I’m a fan of Victory. I really enjoy Prima Pils and Summer Love and I am looking forward to trying more of their line. It was just that Headwaters (Pale Ale, 5.1%) didn’t live up to what I’ve gotten used to from Victory. The flavor was on the bland side and it never really went anywhere. It could be refreshing on a hot summer day, but it isn’t likely that I’ll find out. My better half went for Hop Devil (IPA, 6.7%), but didn’t like it much. I’ve had it before and like it enough that I know I’ll have it again, so it just wasn’t to her taste. At least now I know that if I put that?in the fridge, none of my beer will go missing!

Away we went to Hacker-Pschorr and Paulaner ?for (Hefe) Weisse (German Hefeweizen, 5.5%)?and Hefe-Weizen (Hefeweizen, 5.5%). Bottom line, we enjoyed both and look forward to them making their way into our fridge. Both were crisp, tasty and refreshing. And just what we needed after having a couple we didn’t quite enjoy!

And then there was our hands-down favorite. And we weren’t alone. This brewery had the longest lines, all night long. ?So long in fact, that we almost didn’t bother with them. But my buddy Scott was with us and said we had?to try it. We would love it. And so we were introduced to Innis & Gunn. They had their full range with them, but we both went for the Rum Cask (Scotch Ale, 7.4%). It had a wonderful reddish color and was very clear. I’m not even sure how to describe it. I mean, it was light, but flavorful, fruity, but spicy…just a very pleasing beer. They had a list that showed places where you could get it, none of which were within 45 minutes of where we live. It made me mad. Imagine my surprise when I talked to Frank at the liquor store about it, practically demanding that they carry it, only to have him walk me to the back where?Rum Cask?was sitting on the shelf. I felt silly…and if I hadn’t just paid for a 6-pack of Merry Monks’, I’d have grabbed the Rum Cask. Once there’s room in the fridge, the Rum Cask?will be mine! <insert maniacal laugh here>?

We were ready to call it a night after our visit with Innis & Gunn, but we decided to try a couple more on the way out. Seeing as I live in Jersey, I couldn’t leave without giving something from East Coast Beer Co.?I keep hearing about them, but have never seen their stuff in my usual spots, so I wanted to sample it while I had the chance. I went for Winter Rental (Black Lager, 5.6%). It was a solid winter brew, pretty typical. Nothing special, but by no means on the low end of things, either. I probably would have enjoyed it more, if I hadn’t had it on the heels of Rum Cask. I fully intend to pick some up for a review. As my wife pointed out, it probably didn’t hurt that they had a “Cute little beach blonde” (my wife’s description) pouring for them. Who else would pour beer that’s made down the shore!?!

While I sampled that, Sara and Scott tried out ciders from Doc’s Draft. Scott had the raspberry, Sara got apple. Neither were remarkable for anything other than their aroma. And that wasn’t good…it smelled like a pack of new diapers. It isn’t a terrible smell, but it isn’t what I want to inhale when I’m about to take a sip. My wife finished hers, but Scott poured his out. I don’t think my diaper description sat well with him.

Last, but not least, Scott and I headed for the 21st Amendment Brewery sign. When we got there, we didn’t find anyone from 21st Amendment. I was kind of ticked, because I love?their artwork and really wanted to try their stuff. I was immediately placated though when I saw a guy wearing a Harpoon Brewery t-shirt pouring beer. I like Harpoon, but that isn’t what he was offering up. Instead, he poured me a glass of Brother Thelonious (Belgian Style Abbey, 9.3%)?from?North Coast Brewing Co. Did you get all that? I went to the 21st Amendment table to have a North Coast Brewing Company beer, poured by a guy from Harpoon.

Anyway, Brother Thelonious?was an absolute treat. I’m a big fan of Belgians and this was right up there with the best of what I’ve had. It was rich, loaded with flavor and as smooth as it’s namesake. This is another winner in my book. And the best part? When you buy it, North Coast makes a donation to the Thelonious Monk Institute of Jazz! That’s right, brother. Your hobby of drinking beer can help support promising young musicians, so pick some up today! 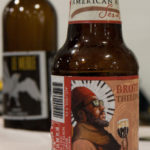 I think I left a couple out, but that’s OK. I touched on the good ones and warned you about the ones that were less than good. That’s about all I can do, right? I’m really looking forward to doing full reviews in the coming months of many of the beers we tried.

On top of all of that, I popped over to the New Jersey Craft Beer table to say hello and check out their list of participating locations. ?First of all, if you live in NJ and haven’t heard of NJCB, click on that link and check them out. I am yet to find a better resource for beer information than NJCB. Not only that, but members are entitled to discounts at restaurants, bars and packaged goods stores throughout NJ! Don’t see a place on the list you think should be there? TELL THEM! The crew at NJCB is working hard to expand the list and you can rest assured that they will check into getting your favorite place to sign up. Second of all, these folks know how to sell. NJCB hasn’t been around for very long at all, but already have 109 locations participating as of this writing. They even managed to sell me a membership at the Expo, when all I wanted was more beer! Seriously though, check them out. Membership isn’t expensive and for the discounts you get all over NJ, you’ll get the cost back in no time! I promise, I’m nothing more than a card-carrying member. If you join, I gain nothing…but you’ll be glad you did!

All in all, we had a good time at the International Great Beer Expo and look forward to doing it again!

Until next time, happy drinking and hoist one for me!