You are here: Home / 52 Portraits / Frank the Beer Guy

Many of you reading this know that over the past couple of years, I’ve become a big fan of craft beer. Many of you also know that I avoided drinking beer outside of social settings at all costs, for the better part of a decade. I am NOT a fan of big breweries. Never liked the taste, couldn’t find anything I loved, so I gave up. That was up until I got together with a friend who was in Philly on business and I was introduced to The Mad Elf. It was all uphill from there.

Exploring the world of craft beer is a lot of fun. But it really helps when you have a knowledgeable guide to help you navigate that world. That’s where Frank comes in. 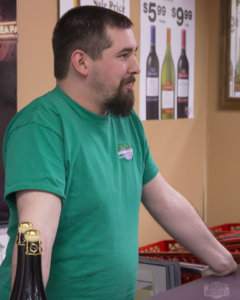 Frank is the Craft Beer Manager/Specialist/Guru/Genius behind the epic selection of beer at Petrock’s Liquors in Hillsborough. Over the past two years, Frank has helped me find some incredible brews and introduced me to a number of different styles. And outside of the genre of sour beers, Frank has managed to find something I enjoy in everything from Belgians to Saisons. We’ve even reached a point that when I’m out of state, I’ll text Frank to find out what I should keep an eye out for and ask if he wants me to bring anything back. THAT has led to both of us getting some really tasty stuff.

And just how cool a guy is Frank? He came to my opening night at HAT Tavern in 2012. We didn’t know each other well, but the fact that he showed up told me everything I needed to know about Frank. From that point forward, I began to refer to Frank as a friend, not just the beer guy.

These days, I usually see Frank more often than I see a lot of my friends. I rarely miss the Petrock’s craft beer tastings (Most Saturdays from 3-6) that Frank puts together and there’s usually a midweek visit or two, as well. This shot was taken at the tasting on Saturday, where Frank featured a pretty killer trio of ?Ballast Point Calico Amber Ale, Sierra Nevada Ruthless Rye, and Bockor Bellegems Bruin. I brought home a 6 pack of the Ruthless Rye and when it warms up, I see Calico Amber Ale being a regular in my fridge, too.

Anyway, if you’re near Hillsborough and looking for Craft Beer, head down to Petrock’s and ask for Frank. The rest of the staff is very knowledgeable as well and are some of the nicest people you’ll ever meet. But when it comes to craft beer, Frank’s the man. He’ll help you find what you’re looking for, even if you don’t know what it is when you walk through the door!