It’s always fun when we get together with our friends. Especially when the kids are involved. And while I don’t always bring the camera with me, this day I was acting as educator, as well as catching up.? 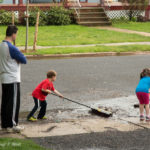 As usual, no one is safe from the portrait blog and since I was there to teach, how could anyone argue?

Eddie didn’t ?hesitate to work with me and I had a shot in mind. But as I started to arrange things for the photo, things took a turn. I knew that I wasn’t going to get my shot. The thing is, once I captured a the photos you see below, I didn’t care!

There is a reason that I keep my options open while shooting. Even though I usually have a specific result in mind, things change. In those situations, it’s better to adapt, than to try and force a shot.

In this case, there’s a little history behind the photo I wanted to capture. You see, Eddie and I go back a ways. He was in my wedding party and even though we don’t see each other often enough, when we do, it’s as if no time has passed. Things have changed since the first time we met. Eddie graduated from college, we’ve both gotten married to wonderful women, we both have kids, we’ve both chosen career paths (although Eddie was already well on his way with his chosen profession when we met), etc.

But even though all of that has changed, the friendship hasn’t. We joke around about a lot of the same things that we always have (baseball especially – Eddie is a Mets fan, I’m a Yankees fan) and genuinely enjoy each others company. So when we got together with the families, I made sure I wore a Yankees jersey, just to rub it in a little. What I didn’t expect was to see Eddie in a Mets shirt, but I wasn’t surprised.?And that’s exactly why the shot I wanted to get was that of a frustrated Mets fan. Eddie has a good sense of humor and a good nature, so I knew he wouldn’t fight it!

But before I could get my shot, Eddie’s little girl happened to notice him sitting on the steps. And what you see here is what she decided to do when Daddy had a seat.

After seeing this, how could the shot be anything else? 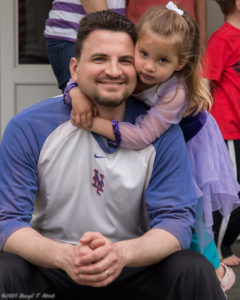 When ?you’re taking pictures, it is imperative that you are aware of your surroundings and be prepared to adapt to the things that unfold. Scenes like this are the reason I rarely go for just a single shot, instead focusing on personality for a period of time. It allows me to capture candid photos during a session that would otherwise be missed. In this case, a daughter, unprompted, is showing her Daddy just how much she loves him. Eddie never saw her coming, which brought the natural smile to his face that his friends see frequently. I’m ?happy that I was able to capture this moment, because this is the definition of the Eddie we all know and love!