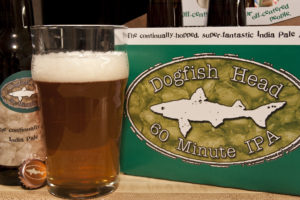 The things I missed out on, by giving beer up for so long…I mean, what beer drinker takes this long to get to 60 Minute IPA?

Maybe I haven’t mentioned it, but I gave up beer for a very long time. A decade, actually. I just couldn’t find a beer I liked. Well – that’s not true. I’ve always loved Shiner Bock, but until recently, I couldn’t get it here in NJ. So…no beer. For 10 years. I missed the initial surge of craft beer in this area, but that might not be a bad thing. Because now there are so many great beers for me to try!

What they say: “60 Minute IPA is continuously hopped — more than 60 hop additions over a 60-minute boil. (Getting a vibe of where the name came from?)

60 Minute is brewed with a slew of great Northwest hops. A powerful but balanced East Coast IPA with a lot of citrusy hop character, it’s the session beer for hardcore enthusiasts!”

My take on it: Pours nicely with a thick head over an orange, almost brown body. Leaves a pleasing amount of lacing on the glass! Very hoppy smell – very forward. It’s strong, but not unpleasant. To someone that isn’t used to a hoppy beer though, it could be a turn off. Definite hits from citrus and florals.

When it first hits your tongue, it’s almost sweet. It matches the smell nicely. It has a nice, clean taste to it and while it is hoppy, it’s well balanced and a very pleasant beer to drink. It also has just the right amount of carbonation, which gives it a nice feel while you’re drinking it. It’s easy to drink more than one, too, since it comes in at 6% on the nose.

Easier to find than 120 Minute IPA and less expensive than 90 Minute IPA, at $9.99, 60 Minute IPA is a good, every day IPA. I actually had to buy a second 6-pack, because I originally planned to review it last week. But I had trouble keeping a bottle – it seemed to go well with everything I ate!

Most people reading this have probably had 60 Minute IPA before. But if you haven’t, go grab a 6-pack and enjoy. It’ll be a nice introduction for you to a great East Coast brewery!