?Originally, my hope was to have this review up in time for Cinco de Mayo. Obviously, that didn’t happen!

This may not necessarily be a craft beer, as it’s brewed by what is basically Mexico’s version of Anheuser-Busch, but it does tie in nicely to Cinco de Mayo, since it’s a Mexican beer that ISN’T Tecate or Corona. 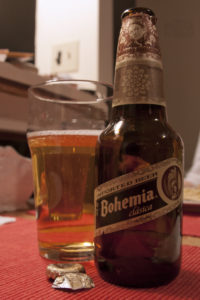 Although I suppose you could put one in, if you wanted to.

Bottom line for me, this is easily the best Mexican beer I’ve had to date (Not that I’ve have many, but still…)

Bohemia is a German Pilsner, brewed by Cervecer?a Cuauht?moc Moctezuma, S.A. de C.V.??and comes in at about 5.3%.

Packaging is attractive with a gold foil and black label with artwork that appears to be Aztec-inspired.?The body is a light, straw yellow color with about a one-finger, white head on top that doesn’t last very long. The scent it gives off is sweet, maybe with a hint of honey. Not overwhelming by any means.

It isn’t a complicated beer – I really don’t have any tasting notes. It goes down easy – no question you could drink a few of these without thinking too much about it. Bohemia would make a great session beer, no doubt.

I found myself going to Bohemia repeatedly when we had a few warm days in a row and I was grilling. And drinking a couple, where I would normally drink one. The taste is pleasant and very well balanced, with no aftertaste to speak of. Starts with a malty flavor and finishes with a bit of a citrus taste. Feels light in the mouth, which I’ll attribute to a healthy amount of carbonation. That being said, it’s no lightweight in the flavor department. Everything about this beer screams “light” but when you drink it, it has a much better flavor than what you expect.

This is definitely a beer I could see putting in the hands of a Budweiser fan – it would feel similar to them, but better tasting.

I’ll give Bohemia a 5 out of 10. It’s certainly not a standout brew for me, which keeps the score average. It’s not really one of those beers I look at and say “I gotta have more!” But at the same time…well, I think I’ll have more…