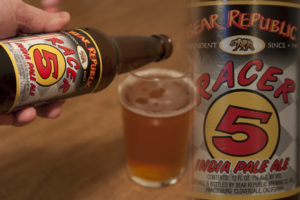 What they say (Bear Republic Brewery, 21+ please):
?This hoppy American IPA is a full bodied beer brewed American pale and crystalmalts, and heavily hopped with Chinook, Cascade, Columbus and Centennial.
There’s a trophy in every glass.?

I bought Racer 5 because of the graphics.

What can I say? I love me some Speed Racer?and the artwork gives an obvious nod. So, I tried it.??

On average, I’m getting about a 1-finger head that’s short-lived over a clear, orange body and leaves a surprising amount of lace behind.

Racer 5 has a strong aroma – very citrusy and even a hint of pine. I was skeptical right away because to me, that’s not really a pleasant mix. The taste wasn’t all I was hoping for either. Maybe my expectations were too high, but this was pretty plain, as far as IPAs go. No surprises in the taste department. Bold with a citrus start, but then it quickly goes to the bitter side, which is the result of a pine taste that seems to linger. Guess that makes sense, considering the aroma! For someone that is a fan of a good IPA, this beer is might be right up their alley. For me, not so much. ?It never settled in, and I prefer a balanced brew. Despite all that, Racer 5 still goes down easy at 7% with good amount of carbonation. ?I can’t drink it alone though – I have to have it with a meal to offset the taste. It’s telling that I’ve had the 6-pack for 10 days or so and there are still two bottles in the fridge as of this writing.

The price is right – $9.99 for the six. And it isn’t so bad that I won’t try other Bear Republic beers, but Racer 5 won’t be back in my fridge anytime soon.?

I guess my?trophy is in the packaging, not in the glass.